The Truth About "True Woolen"

I've been laying low and spinning for the past few weeks, with sporadic bursts of baking and holiday gatherings thrown in to keep things interesting. I've been pondering the projects I am taking on, preparing for my 2013 workshops, and writing. And all of this means I have been thinking way to much about the minutiae of our craft.

So I was deep in this place of over-thinking when the dreaded phrase that never fails to raise my blood pressure came up again. This phrase is one commonly used in technical spinning circles, but it's definition varies from expert to expert. It is a phrase that strikes terror in the hearts of spinners everywhere. And it is a lie. This phrase is "TRUE WOOLEN".

As spinners, we all want to do it "right". We want to make our yarns in the best traditional manner we can. But few of us actually understand the physics and mechanics of making the yarn, even the most experienced of us. We rely on the experts and gurus who have taught us for the correct language, the proper terminology, and the correct definition of the terms. As a teacher, I have seen dozens of people who have spun, successfully, for years suddenly throw everything they know out the window because a famous teacher told them that they were doing it "wrong".

Now, I am not a fan of the "there is no right or wrong" school of spinning, either. I do believe that some techniques are more effective than others, and that learning these techniques and refining them will make you a better spinner.  And, sometimes, you have to learn the less-effective techniques, too. Learning the "wrong" thing will often help you understand the "right" thing. There are several very effective ways to make yarn, each with its own virtues and shortcomings, each with a very specific outcome. It is learning which techniques works best for the result you want that sets you free to be a great spinner.

As I see it, the problem does not lie in the "right" and "wrong" techniques. It lies in the language we use to describe these techniques. And some of the most misleading and inaccurate language exists in the phrase "true woolen".

Here's what's wrong with that phrase: "true woolen" is far too often used to describe a drafting technique rather than the yarn. Woolen and worsted are words that describe YARNS, not techniques. I cringe every time I hear someone say, "I'm working on perfecting my worsted drafting." or some such other twaddle. (Though I will admit that I frequently joke that "that's some of the worsted drafting I've ever seen!") I reiterate: worsted is NOT a drafting technique. Nor is woollen. They are the resultant yarns.

Briefly, to clarify: A woolen yarn is one in which the fibres, after spinning, plying, and finishing, lie in a non-parallel arrangement. The fibres, when examined, will be jumbled in all directions, pushing outward and making a fuzzy, lofty yarn. A worsted yarn, on the other hand, is one in which the fibres, after spinning, plying, and finishing, lie parallel to each other. These fibres will be arranged in a smooth, linear manner, pulled close together and pushing up and down along the length of a smooth, compact yarn.
What determines whether a yarn is woolen or worsted is NOT how long your drafting zone is, or how fast or slow you draft, or whether you double draft or not. It is how the twist enters the fibre and how it stays there. There are several steps to creating a woolen or a worsted yarn, which I will not go into in detail here today. Let it suffice to say that selection and preparation of fibres, spinning techniques (including spinning wheel set-up!), plying, and finishing techniques are all factors in making these different styles of yarns successfully. And the more of these steps that are appropriate to the style of the yarn, the closer to "true" woolen or worsted we get.

And it is at this point that I get a little testy. There is pretty much one way to draft a worsted yarn: by pulling the fibres straight and guiding twist in with your lead hand. There are several ways to draft a woolen yarn, all variations on a theme. We attenuate (pull the fibres into a thin line) and allow the twist to go where it will. We do not guide the twist in, we do not control or compact our fibres with our lead hand. We pull those fibres thin over a space of a few inches, or we can pull them out to the full extension of our arm. We can pinch fibres to control the rate at which the twist grabs them, or we can let the twist travel unimpeded. (We call the first "supported long draw" and the latter "unsupported long draw".) We can use a Scotch-tension wheel, or a bobbin-led, or a double-drive. Or a spindle. No matter how fast or slow we draft, no matter how long we pull back, these techniques all achieve the same result: a non-parallel yarn.

Adherents of the "true woolen" draft insist that we must draft quickly and with little control, relying on "double-drafting" (another bugaboo--don't get me started!) to smooth out our yarns. They sneer at slow, controlled drafting, or at "supported" drafting as being less than traditional and resulting in inferior yarns. They tell us that other methods make our yarns "too tight for woollen", or worse, the dreaded "semi-woolen".  They tell us that woolen yarns must be, by definition, uneven in the singles, lumpy and slubby. They tell us that we cannot make a lace-weight or thin woolen, that woolen must be thick to be lofty. They are wrong, or at least inaccurate, on all counts. The simple fact of the matter is, if you do not guide the twist into fully parallel fibres over a short, controlled space, you are making a woolen yarn. Tight, loose, even, uneven, thick, thin, semi-, hemi-, or demi-, WOOLEN. 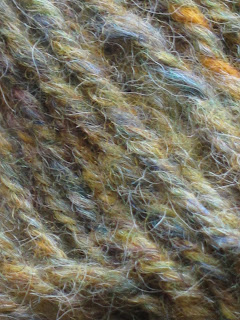 I think it is time to put a stop to this nonsense. We have got to stop labelling one drafting method as a "true woolen" technique, and we have to start looking at what the language of our craft means. Let's stop using the word "woolen" to talk about drafting and start using the proper words like long-draw and short-draw. Let's stop quibbling over "supported" and "unsupported". Let's make the yarn that we want to make, in the best way that works for us and stop putting false labels on the way we do it.

Lets make yarn that is true for us.

Posted by Michelle Boyd at 1:25 PM

Michelle Boyd
I am a fibre artist and educator living with Rheumatoid Arthritis. These are the tales of my work, my travels, and my fight with chronic illness.